Gaofen 3, a radar imaging satellite, was launched into Low Earth Orbit (LEO) on 10 August 2016. The Chang Zheng-4C (CZ-4C, or Long March 4C) launch vehicle carrying the satellite lifted off at 06:55 CST (22:55 CTU on 9 August) from Launch Complex 9 of the Taiyuan Satellite Launch Centre, in Shanxi Province.

This was China’s 11th orbital launch mission in 2016, and the 233rd flight of the Chang Zheng (CZ) family of launch vehicles.

The space tracking ship Yuanwang 6 stationed in the Indian Ocean provided telemetry and tracking support during the launch.

Gaofen 3 is the sixth mission in the Gaofen (“High Definition”) civilian Earth-observation satellites for the China High-definition Earth Observation System (CHEOS). The CHEOS is a state-sponsored programme aimed to develop a near-real time, all-weather, global surveillance network consisting of space, near-space, and aerial observation platforms. The programme was originally proposed in 2006 and officially initiated in May 2010, with as many as 14 satellites set for launch between 2013 to 2020.

The CHEOS is one of the 16 key science and technology programmes initiated under the Chinese government’s Medium to Long-term Development Plan for Science and Technology (2006—2020). The State Administration of Science, Technology and Industry for National Defence (SASTIND) oversees the construction of the CHEOS. The China Aerospace Science & Technology Corporation (CASC) consortium is responsible for the development of its space segment, and the Centre for Resources Satellite Data and Application (CRESDA) the ground segment.

The imagery supplied by the Gaofen series satellites are used for wide range of applications including agricultural planning, disaster relief, climate change monitoring, geographical mapping, environmental and resource surveying, maritime surveillance, and national security. Gaofen 3 is the only radar imaging satellite in the Gaofen family. Primary users of the observation data from Gaofen 3 include the State Oceanic Administration (SOA), the China Meteorological Administration (CMA), the Ministry of Civil Affairs, and the Ministry of Water Resources. 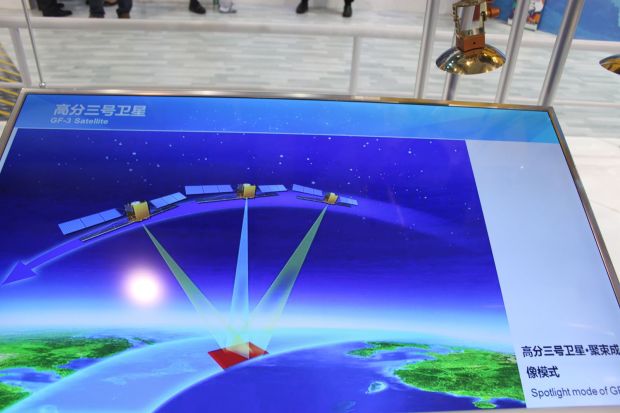 Gaofen 3 was designed and built by China Academy of Space Technology (CAST, or the 5th Academy) of the China Aerospace Science & Technology Corporation (CASC). The satellite carries a Synthetic Aperture Radar (SAR) imager operating in C-band, capable of providing earth images up to 1 m resolution (with 10 km ground swath). SAR technology sends microwaves that penetrate the clouds, and then captures and records the images that are echoed back. These images are downloaded through a high-rate data transmission link. Unlike conventional electro-optical imagery satellites, SAR satellites can operate in all-weather, day/night conditions, and can even capture images of underwater and underground targets. The SAR package of Gaofen 3, featuring a large radar antenna 18 m in length, was developed by the Institute of Electronics of the China Academy of Sciences (CAS).

The press release by CASC highlighted the versatility of Gaofen 3, which can operate in 12 different working modes, from high-resolution (1 m) to large-swatch (650 km), and from maritime imaging to combined land/water imaging. The 2,950 kg mass satellite operate on a 755 km LEO (98º inclination), with a designed operational life of 8 years, the longest among China’s LEO Earth-observation satellites. The radar package is capable of operating for up to an hour, another record in China’s radar satellites.

Development of Gaofen 3 began in December 2010 and the prototype was certified by the CASC and primary users in September 2013. The operational satellite was completed in March 2016.