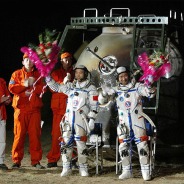 The Shenzhou 6 mission was the sixth flight of the Shenzhou manned capsule, and the second manned mission. The purposes of the mission were to demonstrate the human space flight technology and test the design of the spacecraft and ground support systems. The mission was also the last mission of Phase-I of the China Manned Space Programme (Project 921), showing that China had grasped the technology to put humans into Earth orbit and return them to Earth safely.

The Shenzhou 6 spacecraft was in the early flight test configuration, with a second pair of smaller solar panel wings attached to the orbital module. This allowed the module to function as a stand-alone satellite to continue flying in orbit after the mission had completed. The spacecraft featured 110 improvements in design and onboard systems to its predecessor, including a food heater, redesigned astronaut seats, and a sleep bag in the orbital module. An “excrement collecting facility” – or space toilet – was being used for the first time. The improved onboard flight data recorder, or “black box”, had 100 times more storage space and 10 times faster read/write speed than the old design, but with only half of the size. The CZ-2F (Y6) launch vehicle also featured 75 improvements.

The departure ceremony was held outside the astronaut apartment in the Jiuquan Satellite Launch Centre at 05:30 local time on 12 October. The ceremony was attended by Chinese Premier Wen Jiabao, and two senior political figures Li Changchun and Luo Gan. The weather forecast for the launch window showed a ground temperature of 2-3°C, with a ground wind speed of 6-8 m/s and a high-altitude wind speed of 40-50 km/s, making it ideal for launch.

The prime and backup crews arrived at the launch pad at about 06:00. Flight engineer Nie Haisheng first entered Shenzhou 6’s orbital module via the main hatch at 06:14, followed by mission commander Fei Junlong. The two astronauts then descended into the re-entry capsule below the orbital module and climbed into their seats. At 06:20, they connected their pressure suits to the internal power supply and strapped themselves to the seat. Next they adjusted their seats into the launch position, put on the gloves and closed the visor on their helmets.

At 06:50, the hatch on the orbital module was closed and the three-hour countdown to launch began. At 08:00 in the morning, Chinese President Hu Jintao and several other senior Party officials arrived at the Aerospace Flight Control Centre in the Beijing Space City to observe the launch. The swing arms on the umbilical tower opened at 08:27. At 08:45, mission commander Fei Junlong reported that the crew was ready for the 15-minute countdown. They then spoke to General Chen Bingde, Chief Commander of Project 921, via microphone for their last words before launch: “we won’t let down the motherland and her people”.

At 09:10 (T plus 583 seconds), the Shenzhou 6 spacecraft was separated from the rocket at an altitude of 200 km and entered its initial parking orbit. The orbit insertion was monitored by space tracking ship Yuanwang 1 deployed in the Japan Sea. The crew reported to the mission control via the tracking ship’s communication link that the spacecraft’s solar panels had been deployed and they were feeling normal. The control of the spacecraft was transferred from the Launch Control Centre in Jiuquan to the Flight Control Centre in Beijing. At 09:30, the spacecraft entered the range of tracking ship Yuanwang 2 in the South Pacific near Australia. At 09:33, the two crew members talked to the medical staff in the Beijing mission control centre.

The launch was announced a success by the mission control at 09:39. About an hour later, the spacecraft completed its first orbit and was captured by Kashgar Tracking Station in western China. The crew reported to the mission control that the spacecraft was functioning normally. They untied themselves from their seats at 10:33 and began their first meal in orbit at 11:05. After the meal, one of the astronauts had a three-hour nap while the other continued monitoring the flight of the spacecraft.

While in its fifth orbit over the South Pacific, the spacecraft ignited its four main engine thrusters at 15:54:45 under the command of the Beijing control centre for its orbit elevation manoeuvre. After burning its engines for 63 seconds, the spacecraft entered a 343 km near-circular orbit. At 16:47, the ground medical staff had their third conversation with the crew members.

The crew began preparation for entering the orbital module for the first time at 17:11. The ground mission control checked the pressure readings in the orbital and re-entry modules. Fei first opened the hatch at the top of the re-entry capsule and entered the tunnel between the two modules. At 17:30, the hatch on the orbital module was opened and Fei entered the orbital module to examine the onboard equipment. The two crew members took off their pressure suits and put on the blue flight suit, which made it easier for them to move around. At 21:32, the two astronauts spoke to their families in the Beijing control centre via the video link.

In the next 60 hours, the two crew members alternated their shift for sleep and monitoring the flight. They tried various movements inside the spacecraft to test their impact to the spacecraft.  The spacecraft fired its main engine thrusters at 05:56 CST on mission day 3 during the 30th orbit for an orbit maintenance manoeuvre. The air and ground rescue teams in the recovery site conducted four search and rescue drills, including one during night. The three Yuanwang space tracking ships deployed to the Pacific and Atlantic encountered poor weather and sea conditions, but managed to continue with their tracking mission. Chinese President Hu Jintao spoke to the two crew members at 16:28 CST on mission day 4.

After orbiting the Earth for 75 times in four days, Shenzhou 6 began to prepare for its re-entry. The two astronauts returned to the re-entry capsule and sealed the hatch to the orbital module. They put on the pressure suit and strapped themselves to their seats. At 02:40 CST on 17 October, the re-entry procedure was initiated. The re-entry sequence was initiated at 03:42 by a command issued by the space tracking ship Yuanwang 3 positioned off the west coast of Africa. The orbital module was jettisoned at 03:44 and the spacecraft then fired its four main rocket thrusters while travelling in a ‘backside first’ position to de-orbit. The service module was jettisoned at 04:07 while the spacecraft was travelling over the Middle East, and the re-entry capsule carrying the two crew members entered blackout at 04:13.

At 04:16 CST, the tracking radar in the main recovery site captured the Shenzhou 6 re-entry capsule. The main parachute was deployed at around 04:20 and the heat shield at the bottom of the capsule was jettisoned at 04:23. Ten minutes later, the capsule touched down on the grassland of Inner Mongolia. The search and rescue helicopters reached the landing spot half an hour later. The ground rescue crew opened the hatch on the re-entry capsule at 05:07. After some initial medical assessment, the two astronauts exited the capsule at 05:38.